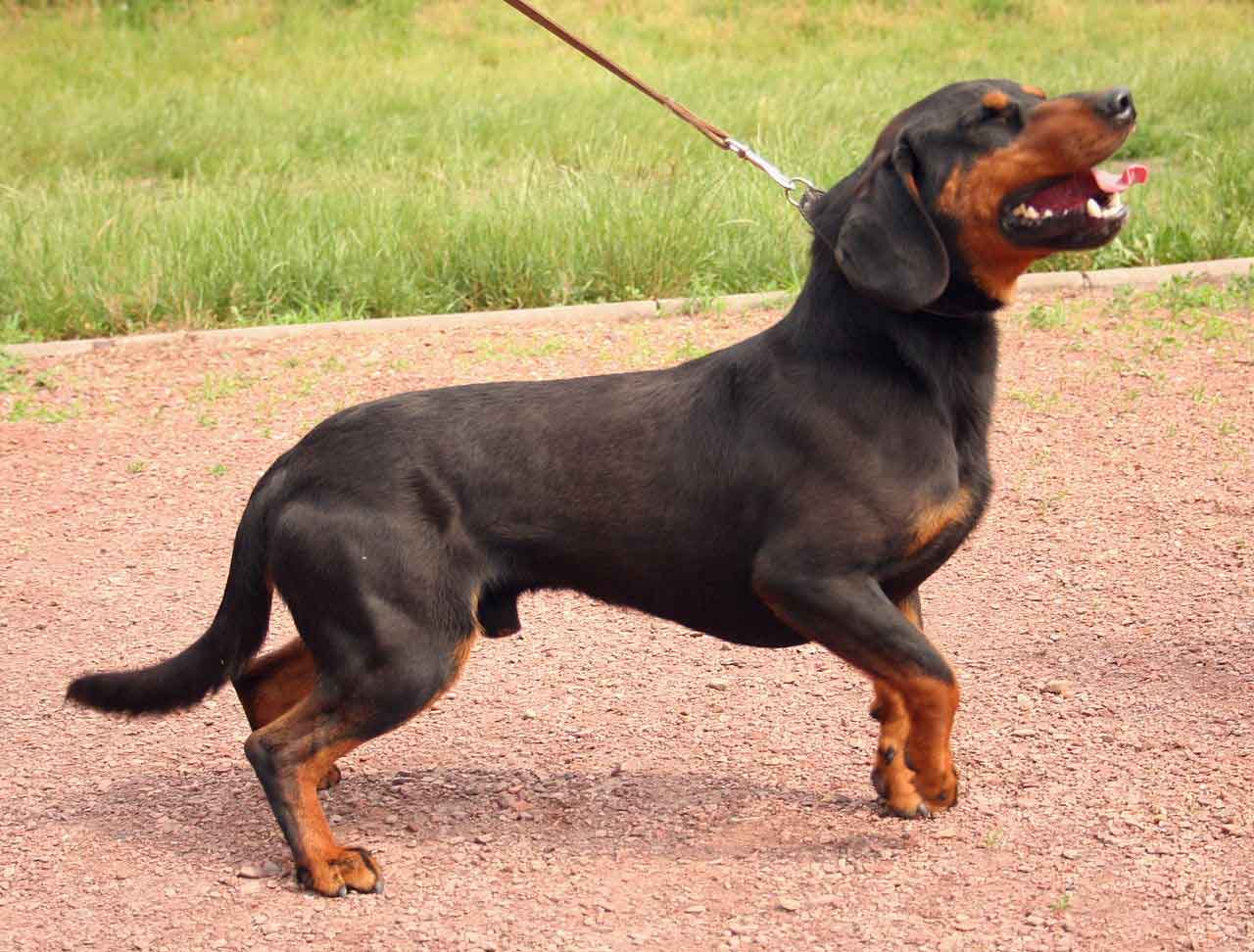 The Slovakian Hound stands out for its extraordinary sense of direction, which is considered the best among the canine breeds.

No se mantiene ampliamente para ningún otro propósito que no sea la caza, the Slovakian Hound He has honed his hunting skills over the centuries and is respected within Slovakia for his tracking ability and endurance. Despite its proven track record in the field, rarely seen internationally. curiously, when seen internationally, sometimes it is called “Black Forest Dog”, a completely wrong name, since the Slovakian Hound it's not now, and has never been, native to the Black Forest region.

Like many other breeds of dogs of the time, the population of the Slovakian Hound disminuyó dramáticamente durante el período de las Guerras Mundiales. It is attributed to a Slovak named Koloman Snail having brought the race from the brink of extinction at this time, al establecer exitosos programas de cría a nivel nacional.

Officially accepted as a breed in the decade of 1870, the first club of the breed Slovakian Hound was recently formed in 1988, in the capital of Bratislava. The Slovakian Hound it is so popular in its birthplace that it has been named the national breed of Slovakia.

Always black with fire marks, the Slovakian Hound have solid bones despite their fairly slight stature. The body is in the shape of an elongated rectangle. His eyes reflect vivacity and courage. They are dark and almond-shaped. The ears are of medium length, rounded at the tip and falls flat against the head. This dog is notable for its constancy in following a cool trail or trail for hours, giving the voice without hesitation. They are also distinguished by their bite, por lo que se utilizan en su país natal para cazar jabalíes y otros carnívoros.

He is endowed with a lively temperament. Your sense of direction is extraordinarily well developed.

Hair is 2-5 cm long, medium thick, well lying, dense. Longer in the back, neck and tail. The undercoat is dense, especially during the winter months; However, it should not be absent in summer either.

This determined hunter must be tenacious when on the road and courageous when facing the animals he hunts., como el jabalí y el ciervo. They have excellent olfactory abilities and will painstakingly trace a scent back to the source. Un animal independiente que se alegra de trabajar con un mínimo de interacción humana, the Slovakian Hound need little direction. A pesar de esto, they are obedient, and they will happily follow their master's plans when necessary.

The Slovakian Hound it's a good watchdog, as he is continuously alert and observant. This, along with the fact that they become devoted to their owners, means they are often protective, and can be used successfully as watchdogs, becoming potentially aggressive if the situation calls for it. Ladrar puede ser un problema y es una queja común de muchos dueños. Excessive barking can be prevented by ensuring that the Slovakian Hound no esté insuficientemente ejercitado y tenga muchas actividades y trabajos para llenar su día.

The Slovakian Hound it is a very resistant dog. En el país de origen el propietario tiene un perro, rarely from, who does not live in a kennel but in contact with the master from morning to night, often used as a general purpose dog, cuidando la casa así como el ganado, and of course hunting. It is adapted to outdoor life and has an iron constitution.

The Slovakian Hound it is a very resistant dog, no particular grooming problems. Short hair, when he comes back from hunting he will be the happiest in the world if you give him the necessary brushstroke for a superficial cleaning at the level of the spikes, caught between the pads, garrapatas posiblemente aún no enganchadas.

He will quickly get used to coming to you for this cleaning because he is looking for contact with his master.

It's a farm dog, the quintessential farm dog. Bad guys just do that. The good ones are able to give the voice, to take the lead by yelling or barking directly at any stranger before coming into view. A good Slovakian Hound should give voice instantly. Not after ten minutes (although, depending on the conditions…). The smell of Slovakian Hound it's excellent, as fine as that of the best Hounds, but his hunting style leads him to voice only in the moment, and of course staring.

Farm dog, you don't need to see the animal, el jabalí para ladrarle después, like some pointing dogs that only bark at sight, or to the noise. With experience, dependiendo de los orígenes, will start barking after turning around to make sure the animal is ten meters away, or more. Once you have fired the bark it will zoom in pretty quickly, but always with care, always staying safe. The Slovakian Hound is not a brave and daring specialist like some races of German Hunting Terrier or pointing dogs, who are inevitably injured frequently. With the, used in its specificity, theoretically, no hay necesidad de un chaleco contra el jabalí, because he knows how to handle attacks. Some are never hurt, if used properly, alone or as a couple.

A good Slovakian Hound, alone or as a couple, rara vez es capturado por un jabalí. Otherwise, in dog teams he becomes a vulnerable dog like any other because his passion is terrible, y allí, better equip it with a vest…

Coexistence is important that you have with your new friend. Before considering the acquisition of a dog of the breed "Slovakian Hound" you know certain factors. Not all breeds of dogs are apt to live in an apartment, you must take into account his character, their need for exercise, their interaction with other pets, their care and if you have small children, their level of tolerance towards them.

If you liked, rate this entry.
0/5 (0 Reviews)
Share with your friends !!
1Twitter15Facebook1Pinterest
17
SHARES