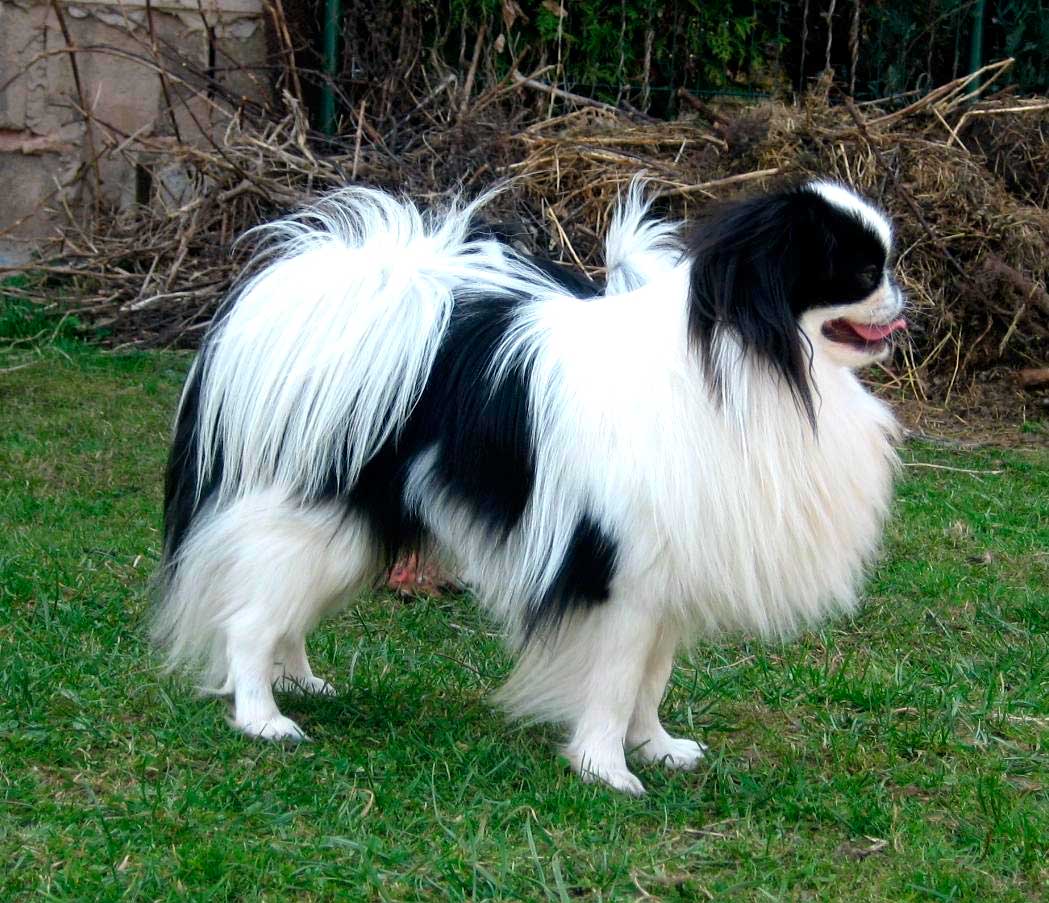 It's a very special race, they have very feline attitudes, is more, It is said to have the character of a cat, and you will see because…

The true origin of the Japanese Chin It is still controversial, Although a general consensus, concludes that originated in Spaniela.

These dogs were brought to Japan around year 732. Some maintain the ancestors of these dogs first arrived to Japan around the year 732, as a gift from royalty Korea, while others argue that Japanese Chin copies were offered as a gift to the Empress of Japan in the middle of the sixth century, other theories say that they arrived in Japan in the year 1000.

The Japanese established various breeds of dogs, with a defined purpose that was work, that Japan considered something different, different from a “dog“, He was considered a work on farm animal, for hunting, to care for cattle, etc., but the Japanese Spaniel, It was something very special because it was strictly considered a companion dog.

As a result, every noble House was raising its own standard, why there are many variations of the Japanese Spaniel, in terms of size, the density of the layer, the eyes, the personalidad…

The Gobi Desert is a large desert region between Spaniela northern and southern Mongolia. Can be one of the deserts, or desert areas largest and most important worldwide. Around it the Altai Mountains and the steppes of Mongolia in the North, Tibet Plateau and the northern plains of the southwest Spaniela. The word gobi means ' desert’ in Mongolian. The Gobi is composed of different geographic and ecological regions, based on variations in climate and topography.

Ludvic von Schulmuth defined as origin of certain dog breeds a former denizen dog of the Gobi desert, whose remains were found in places where stored manure or litter, and called them “Gobi Desert Kitchen Midden Dog”, This animal came several lines which were giving rise to several breeds. For example, a small dog of soft hair and drooping ears that was the ancestor of Tibetan Spaniel, the Japanese Chin and Pekingese. Another branch which descends from the “Gobi Desert Kitchen Midden Dog ” gave rise to the Continental Toy Spaniel and to the Chihuahua longhair. Y, another branch of the same dog of the Gobi desert, gave rise to the emergence of the Pug and Shih Tzu.

There is also some documentation that indicates Portuguese sailors introduced the breed to Europe in the century 17 through the gift of some to Catherine of Braganza, Queen Consort of King Charles II of England, but there is more evidence that the first Japanese Spaniel which opened steps behind borders, It was a gift of the Emperor of Japan offered a U.S. Navy officer, Matthew C. Perry, When he visited East in 1853 to open bilateral trade. The naval officer, a litter seven Japanese took Spaniel, and to reach their land only survived two, and who gave them is something that is still not known with certainty.

What it did have full certainty is that the Japanese Chin, also known as the Spaniel Japanese has been the dog of Japanese royalty.

This small dog of friendly aspect, It has a very similar appearance to that of the Pekingese, But unlike, its legs are longer, and the color of the fur is different; It may be black and white or red and white. The fur is soft and long; the large, dark eyes, well separated each other; the tail, well endowed with hair, relies on the back; the ears are triangular in shape and small size; the snout is short and flattened, and large heads relative to their body.

According to the classification made by Stanley Coren after analyzing the responses of more of 200 the AKC judges ("The intelligence of dogs", Stanley city, Ediciones B, 1995), The Japanese Spaniel is No. 62 from the list.

The Japanese Spaniel barks only when necessary in order to alert the family of the arrival of a visitor or something out of the ordinary, then is a quiet breed.

The Japanese Chin is always alert, He is intelligent and independent, and it uses its feet to wash and dry your face. Other feline features are your preferences for the rest in elevated surfaces, as the backups of the sofa and chairs. It has a spectacular ability to walk through a table of tea without throwing any object, If that doesn't make it a cat total!!!

Some tend to “sing”, they produce a noise which can vary between a minimum triune to a high sound and quite serious in relation to its size, almost with the quality of Opera that sounds like “booooooo”. On race Basenji in the right column you can see a video of the dog singing, it is very similar to what the Japanese Chin.

Diet is an important factor in the health and condition of the Japanese Chin, Many specimens may be allergic to the corn, for example.

Due to their small size they don't need too much exercise, Although, requires frequent walks, because they are active and love to be outdoors. They adapt well to life in an apartment or small homes. On the other hand, their fur should brush your daily, as it is often about getting caught.

Japanese Chin has a long life, to round the 15 years, but in many cases can be extended to more or less the 18 years of age.

Coexistence is important that you have with your new friend. Before considering the acquisition of a dog of the breed "Japanese Chin" you know certain factors. Not all breeds of dogs are apt to live in an apartment, You must take into account their character, their need for exercise, their interaction with other pets, your care and if you have young children, their level of tolerance towards them.

Breed All About It – Japanese Chin