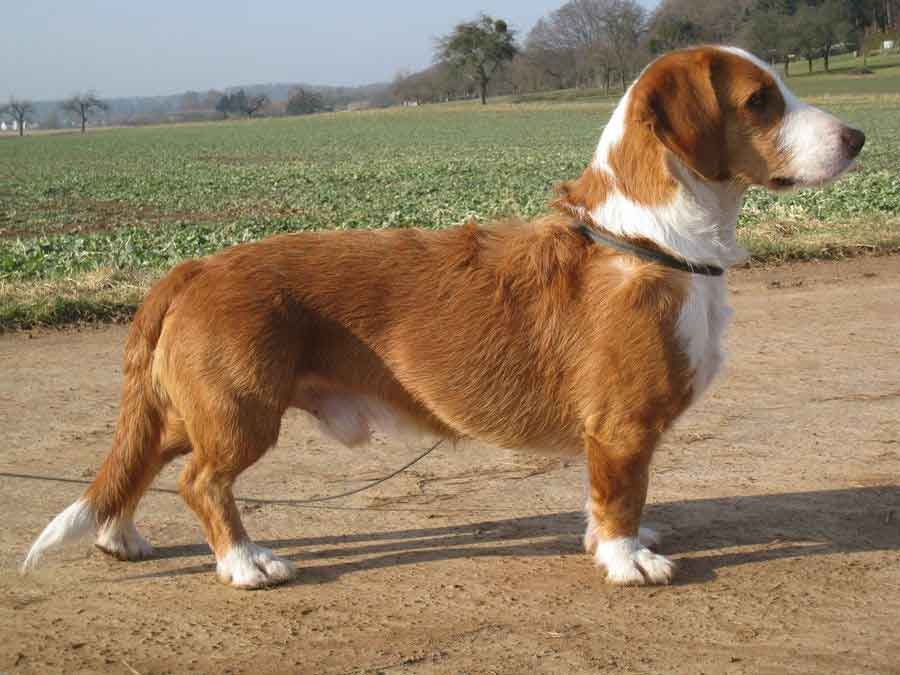 The Westphalian Dachsbracke It is mainly a hunting dog that maintains an active temperament and a great need for exercise.

The Westphalian Badger Dog was developed in the 17th century in Germany, in the region between the Rhine and the Weser. The result of the cross between the German Hound and various types of Dachsbrack, was created to satisfy the need for a fast dog, small and short, able to cut through bushes and chase prey into burrows. They were the favorite companions of the Germanic nobles, who were so appreciated for their ability to hunt hares, rabbits and foxes as per their friendly disposition.

It is mentioned in the official description of the German Hound en la década de 1880, and a first standard was established in 1910. However, the breed was not recognized by the German Kennel Club until 1935, and then by the FCI in 1954.

The Westphalian Dachsbracke It, However, poco común fuera de Alemania. What's more, among the main canine organizations in the Anglo-Saxon world, only the UKC recognizes this breed, and only from 2006.

The Westphalian Dachsbracke It is a small hound that measures between 30 and 38 cm at the withers and weighing about 15 kg. It seems to the German Hound, which is even considered a miniature version.

His coat is tricolor, combining black, red and white. White markings are found on the neck, the chest, the snout, paws and tail tip. Bi-color is not accepted. The coat is rough and very tight, medium length in the back, neck and back of the tail, but short in the rest of the body.

With a slightly elongated skull and a slightly accentuated stop, his head clearly evokes his kinship with the other double basses. His eyes are dark, while his ears, big and long, are flat against the head.

The tail, strong and tall at the base, está en perfecta extensión de la línea de la espalda. It is carried out with a saber blade or hanging.

The Westphalian Dachsbracke he's a smart working dog, stubborn and tenacious who can follow the trail of prey over great distances without hesitation.

They are primarily hunting dogs that maintain an active temperament and a great need for exercise. Esta necesidad debe ser satisfecha cada día para prevenir el comportamiento destructivo del perro. Live in an apartment, although it is not recommended, es posible siempre y cuando el perro pueda dar largos paseos al menos dos veces al día. During these walks, it is strongly recommended to keep it on a leash, in case you smell prey that takes you off the beaten track. However, lo ideal sería que tuviera acceso a un jardín.

In the home, although he is not the most docile of dogs, the Westphalian Dachsbracke shows a lot of attachment and affection for his master, family loyalty, and gets along very well with children. Todas estas son cualidades que lo hacen un perro de compañía muy agradable. However, requires a lot of interaction and availability, ya que necesita compañía constante y no se le puede dejar solo durante todo un día. Playtime and obedience or agility training can keep you busy, but nothing will make you happier than a hunting trip.

Finally, the Westphalian Dachsbracke tolerate other pets as long as they are exposed to your presence from a young age. Otherwise, his hunting instincts take over, and is capable of chasing and hurting them.

Due to its firm character, the Westphalian Dachsbracke can be tough and stubborn in his upbringing. Some commands will take longer to assimilate than with other dog breeds. Therefore, el maestro debe actuar como líder de la manada para ser escuchado y obedecido, y bajo ninguna circunstancia permitir que se haga cargo de la jerarquía familiar. Therefore, it is clearly important not to be fooled by the small size of this dog and to turn it into a “Princess”, at the risk of experiencing real cohabitation problems in the near future.

At the end, the Westphalian Dachsbracke must be trained early and firmly, while promoting the principles of positive dog training.

The Westphalian Dachsbracke he is a robust dog, healthy and with a good life expectancy. However, their kinship to the Basset family explains why they are prone to back problems, ranging from muscle tension to degenerative disc disease.

What's more, you have to be careful with his long and floppy ears, ya que son sensibles a las infecciones de oído. In case of infection, the dog tends to shake its head and scratch its ear. Other signs are a bad smell and the development of redness around the ear canal.. Una infección de oído requiere una visita al veterinario y se trata con medicamentos de prescripción.

Last, like any working dog, a Westphalian Dachsbracke que participa en la caza tiene más probabilidades de resultar herido que un perro de compañía que se mantiene en casa. However, in the heat of the moment, the dog tends to ignore pain, so it is often only after the owner notices lacerations or bites, for example.

One to two weekly brushings are recommended to maintain the very tight and rough-textured coat of the Westphalian Dachsbracke. These dogs should rarely be bathed, since they deprive the coat of its natural oils.

The ears should also be visually inspected at least once a week and they should be dried after soaking in water to limit the risk of infection..

Coexistence is important that you have with your new friend. Before considering the acquisition of a dog of the breed "Westphalian Dachsbracke" you know certain factors. Not all breeds of dogs are apt to live in an apartment, you must take into account his character, their need for exercise, their interaction with other pets, their care and if you have small children, their level of tolerance towards them.

If you liked, rate this entry.
5/5 (1 Review)
Share with your friends !!
Twitter14Facebook3Pinterest
17
SHARES