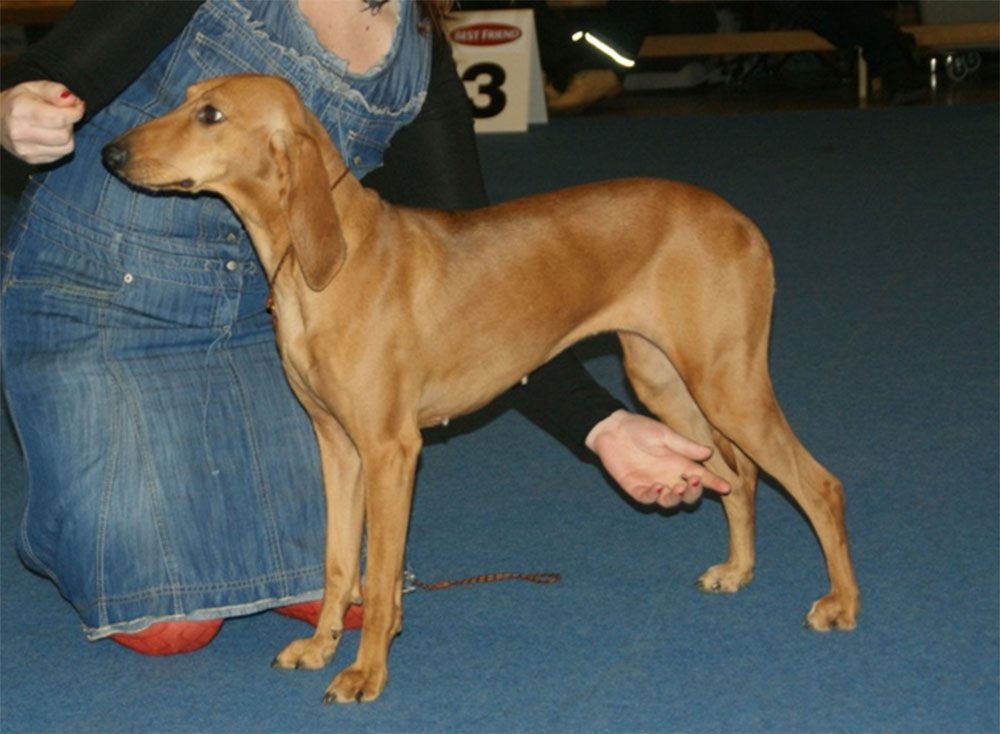 The Italian short-haired Segugio it is a dog with a stable temperament, of a soft but not very outgoing expression.

The Italian hound It, según la gran mayoría de los autores, un perro con orígenes muy antiguos. It is believed, in fact, descended from hunting dogs that lived from ancient Egypt, they reached the shores of the Mediterranean Sea, and therefore also to Italy, thanks to the Phoenician merchants. Many Egyptian drawings dating from the time of the pharaohs show the presence of dogs very similar to the current one Italian hound.

Su mejor período es el Renacimiento, when its level was improved and its great diffusion began. The race then underwent a slow and inexorable decline until, from the beginning of the 20th century, the Italian hound it became very popular again.

The modern history of Italian hound started on 1920, year in which the Technical Committee of the Society of Hound Hobbyists drew up the first breed standard that a few years later, in 1929 to be exact, was approved by the Italian Kennel Club. En ese momento había un solo estándar que unificaba al Italian Rough-Haired Hound and to the “Italian short-haired Segugio“; in 1976 came the prohibition of mating between the two varieties; then, in 1989, the ENCI (Ente Nazionale della Cinofilia Italiana) passed two different standards, standards that were later also recognized by the FCI which classified them in the group 6, among hound-type dogs, and related breeds.

Hair is shaved all over the body, dense, dense and smooth.

The allowed colors are:

– Fawn unicolor in all its gradations.
– Negro y fuego.

Fawn dogs may have a white muzzle and skull, a white star on the chest, white on the neck, metacarpos, metatarsos, feet and tip of tail.

Alive and bold. Never aggressive towards humans; rarely towards other dogs. It does not bite. Suits austere food and country kennels. Not conspicuously affectionate, but constantly needs the presence and consideration of the owner, who often identifies with the one who accompanies him during the hunt.

If he is well-maintained and has a breed-appropriate lifestyle, the Italian short-haired Segugio You can live up 12 or 13 years. This is because this type of dog is not predisposed to particular diseases derived from its breed.

Those who love them say that…

“No elegí vivir con un “Hound”, I mean it was not a choice out of passion for this breed… ¡me pasó a mí! It turns out that I share my life with a “Hound”. It was and still is the most amazing experience of my life. Live with a “Hound” means learning to have time, a lot of time to walk “only” exploring life, silent. It is learning that you can stay in the forest for hours without doing anything other than living and discovering the forest. And that's it. The “Hound” teaches you not to pay attention to appearances, to pursue your passions tenaciously while those who look at you think you are just sniffing. He is an extremely sensitive partner but at the same time proud and independent. Living with Chloe is an adventure, hecha de constantes y sutiles equilibrios entre el compartir y la búsqueda de la individualidad, the desire for freedom and the need to feel close to each other, es aprender cada día a descubrirse y respetarse”.