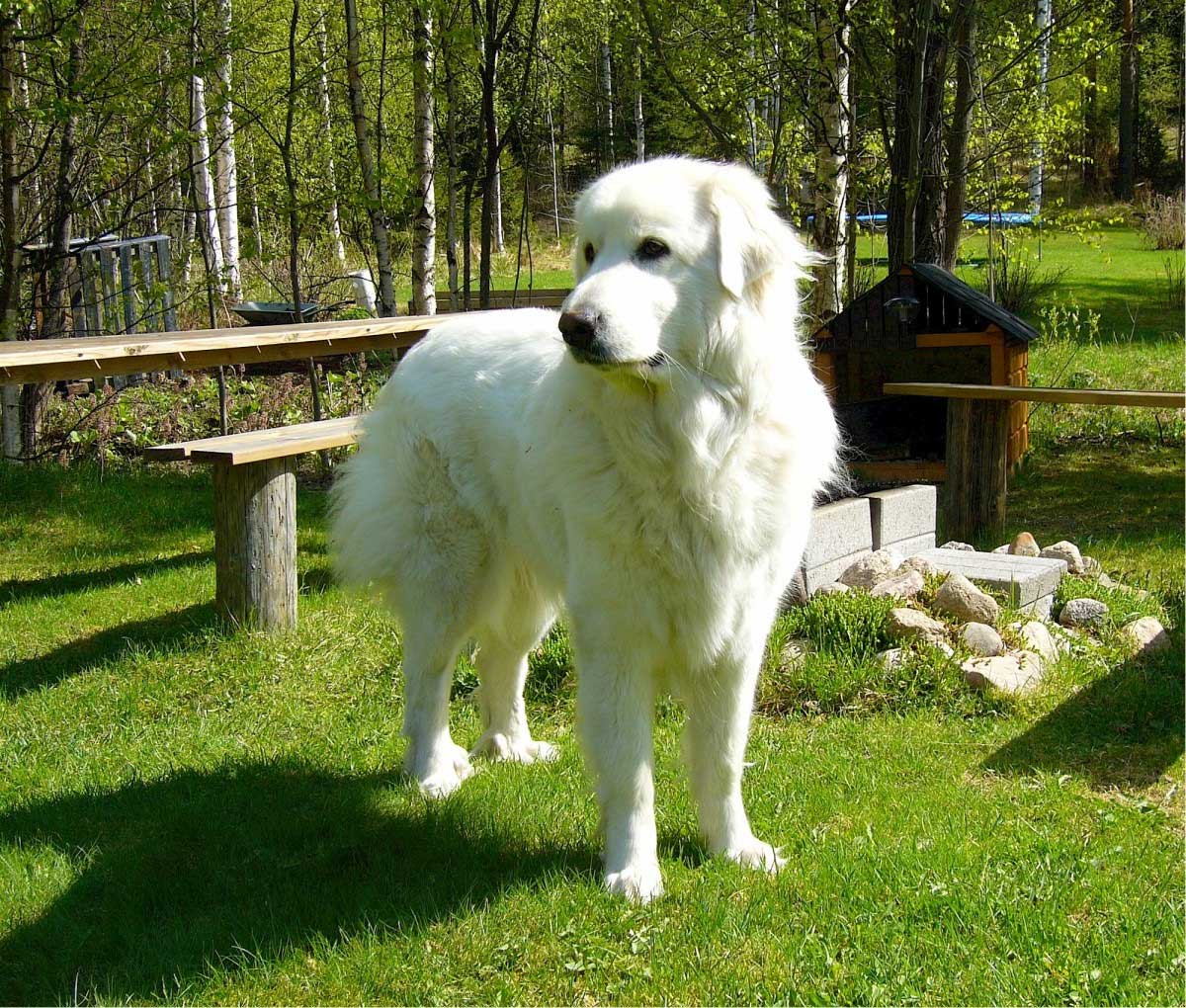 The The Pyrenees mountain dog is a guardian and protector with territorial claims.

The Dog Mountain in the Pyrenees is an ancient watchdog of the mountainous world of the Pyrenees. There it is officially called Chien de Montagne des Pyrénées. The people of the Pyrenees call him the cute little one Patou. The pyrenees, like a vast, deserted and rugged, previously inaccessible mountain range, form the natural border between France and Spain. Here there were and there are wolves and bears, with the consequent problem for ranchers. In addition, sheep used to be one of the few livelihoods of the people here. While in Germany and other Central European countries people mourn the return of the wolf and complain about the damage caused to hunting and herds of sheep, in the Pyrenees dogs such as the Patou from time immemorial. And there are no complaints. Guard dogs are an integral part of every flock of sheep in the Pyrenees mountains.

On the French side, they are officially called Chien de Montagne des Pyrénées or Pyrenäenberghund, on the Spanish side Perro de montaña de los Pirineos or Gran Pirineo. In addition to protecting herds against thieves, wolves and bears, also protected the great properties. His powerful figure, his determination and ability to attack in an emergency were not without effect. The impression must have been so long-lasting that his work was already documented in writings of antiquity and the Middle Ages. Dogs reportedly would have recognized people from afar for their clothing. In 1391 it is said that the Count of Foix did a test. If he came dressed as a tramp, the dogs attacked him from afar without hesitation. If he came dressed as an earl, he wasn't bothered.

The Patou was not a uniform race in the past. In the very remote valleys there were often local races, genetically isolated, optimized for your job task naturally, but in the end the same dogs came out with a very similar appearance and character, although they could have been genetically separated for generations. Extremely harsh living conditions obviously outweighed the disadvantages of inbreeding. Modern pedigree dog breeding became interested in these impressive dogs very soon. Already at the first dog show in France, in 1863, a separate class was established for the Dog Mountain in the Pyrenees.

An attempt was made to establish the Patou also outside the Pyrenees as a watchdog and protection. In 1907 the first standard was established in France. However, due to the two world wars and the associated famine, the population of Patou outside the mountains suffered serious setbacks. In 1955 obtained the official recognition of the FCI – Fédération Cynologique Internationale.

The Dog Mountain in the Pyrenees is a big dog, imposing, powerful and at the same time athletic and agile. Doesn't seem clumsy or massive, but rather elegant piecework. It has a medium length coat, very dense and flexible, which can be slightly wavy. The bottom layer is also very dense. To the colors that the official standard says:

White or white with gray spots (badger gray or wolf gray), pale yellow or orange (rusty) in the head, ears and base of tail, sometimes also in the body.

The Dog Mountain in the Pyrenees it has a majestic height at the withers 70 and 80 centimeters in males and of 65 - 75 in females. The weight must be between 60 and 70 kg. The measurements are quite similar to those taken by the Conde de Bylandt when he first described the breed in 1897, when he just called the dogs “Chien des Pyréneés“. The head of the Patou remember the contours of a molosser. Shows a very alert and attentive facial expression. It is a dog that rests on itself, who first of all observes everything, seemingly listless. This is underlined by his eyes, they're supposed to be sweet and dreamy, with its dark amber color.

The The Pyrenees mountain dog is a guardian and protector with territorial claims. He looks cute and calm looking, sublime and imposing almost like a blank teddy bear, but you must not be wrong. It has a strong character combined with a very own but clear idea of ​​how it should behave – and the others in their domain. This idea is naturally shaped by its use throughout the centuries, where he had to defend his flock to life or death as a guard without the presence of the shepherd and, therefore, had to make decisions independently. The official standard classifies his character qualities as follows:

Since the dog was used exclusively to protect herds against attacks by predators, his selection for breeding was based on his suitability as a keeper, their respectable appearance and also their relationship with the herd. The resulting characteristics are strength and agility, as well as the sweetness and attachment to their protégés. This watchdog has a tendency to independence and initiative, which requires some authority from his master.

A Dog Mountain in the Pyrenees should only be held by an experienced and mentally strong person. First of all, not a family dog. However, it can become so if you have extremely competent guidance from your master or caretaker and if the external conditions are right. Only then can he be a good family dog ​​and lovingly protect all members of the family., including other four-legged friends. In addition, is a good guardian and extremely reliable protector of the house and all those who, in your opinion -which should be clarified-, belong to it. Towards strangers he is suspicious.

The Dog Mountain in the Pyrenees it is extremely undemanding in its maintenance – if one ignores the aforementioned restrictions due to its nature as a watchdog. It is undemanding in its nutrition as well as in its accommodation. You can spend the whole year outside without problems – as long as you have a suitable hiding place and “suitable” does not mean neither kennel nor chain, because he must be able to move in his territory. This large, self-confident dog is quite sensitive and attaches great importance to a close emotional bond with his human family.. You need a trusting relationship with your master or caregiver.

Thanks to modern pedigree dog breeding, the Patou is better prepared for a big city life than other herd protection dog breeds like the Kangal or the Central Asian Shepherd Dog. So if you have a large, well-fenced property in the country, if you have joy, fun, experience and the possibility of getting involved with these dogs, you can experience a particularly impressive and beautiful facet of the human-dog association.

The education of The Pyrenees mountain dog belongs to the hands of a teacher or lover with deep experience and canine knowledge. Like any other race, Pyrenean mountain dogs must be well socialized and educated since they are puppies. It would be irresponsible to want to keep a dog as well as a beginner.

Care and health of the Pyrenean Mountain Dog

The The Pyrenees mountain dog he has no problem with his diet.

The Pyrenean Mountain Dog have a very high life expectancy of 12 and sometimes more years relative to its size.

Coexistence is important that you have with your new friend. Before considering the acquisition of a dog of the breed"The Pyrenees mountain dog" you know certain factors. Not all breeds of dogs are apt to live in an apartment, You must take into account their character, their need for exercise, their interaction with other pets, your care and if you have young children, their level of tolerance towards them.

MOUNTAIN DOG OF THE PYRENEES – THE EDGE OF URTX

Fall in love with the Giant of the Pyrenees, a really big dog