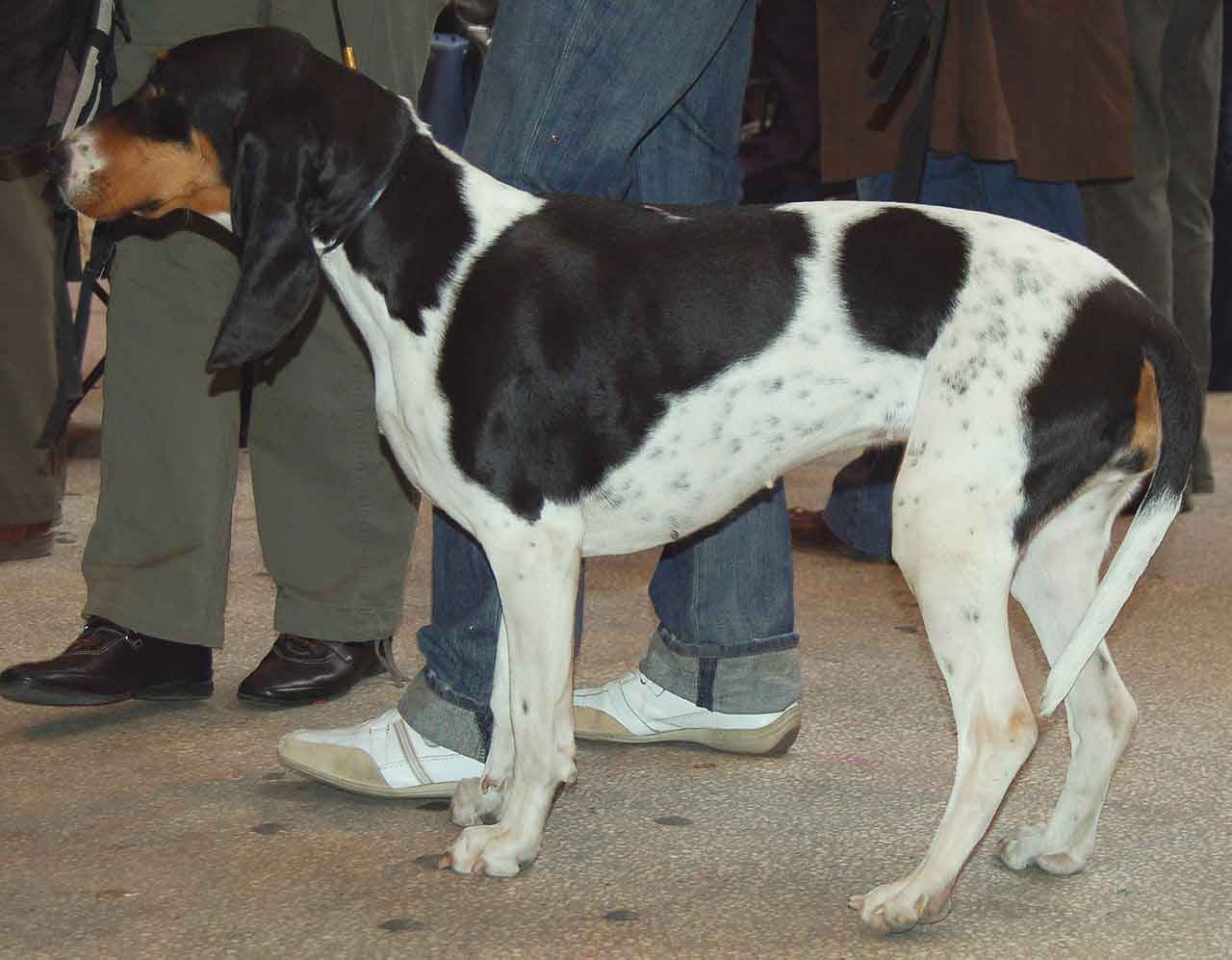 The Bernese Hound It is mainly used for hunting hare.

The Swiss Hound has a very ancient origin. Its existence in Switzerland since Roman times is confirmed by a mosaic discovered in Avanches that represents hunting dogs whose characteristics coincide with the varieties of Swiss Hound. In the 15th century it was appreciated by Italian fans and in the 18th century by the French for its extraordinary ability to hunt hare.. Its original local breeding was surely influenced by French small game dogs brought to Switzerland by mercenaries.. In the year 1882 a standard was established for each of the five existing varieties of Swiss Hound. In 1909 These standards were revised, confirming the total disappearance of the Thurgau Hound. The 22 in January of 1933 established a uniform standard for the 4 Swiss Hound varieties. The original variety of Jura Hound type St. Hubert has disappeared today.

There are four varieties of Swiss Hound:

In the Bernese Hound the coat is white with black spots or saddle, sometimes slightly mottled. Light to dark beige marks the upper part of the eyes, cheeks, the inner side of the ears and around the anus.

The Bernese Hound he is alive and passionate. Its sensitivity is valued as positively as its ease of use and its attachment to the dog handler. When you follow a clue, expansive and fluid movements are noticeable, as well as the good push of the hindquarters. You can feel strength, stamina and temperament, so her fine nose is closely tied to the track.

Acute smell is atypical for Bernese Hound, whose passion for hunting is so tireless that the dog handler must prevent the dog from overdoing it beforehand. Otherwise, the dog chases the prey until he catches it himself. Diligent search is desirable, but the dog, except when used in the pack, must always remain in the hand of your guide.

While the Bernese Hound he was used in his homeland mainly as a lone deer hunter, foxes and hares; Wild boar hunts with bloodhounds are also carried out in western Switzerland. In France and Italy they are more likely to continue to be used for herd hunting of hare, wild boar and deer.

In Switzerland, the Bernese Hound They are mainly used for patent and district hunting. In patent hunting, three to six hunters usually form a hunting party. They are distributed among the different posts and the dogs are tied simultaneously at a previously agreed time. This promotes the independent search of each dog and also the pursuit of hares or deer as a solitary hunter.. For the hunt to be successful, the hunter must know which path the game will take to be able to shoot it with a shotgun at a maximum distance of 30 m.
During a hunt in hunting ground there are large groups of up to 30 hunters. The hunt leader distributes the hunters in different positions, while a hunter goes on the hunt with all the dogs, and finally hold all the dogs at once. Here the leader of the hunt must know how the hunt flees and, therefore, distribute hunters' positions. While hunting in the hunting ground, the hare, the deer and sometimes also the fox are shot from a maximum distance of 30 m.

Off the hunt, the Bernese Hound he is a nice and quiet family member. with whom you are closely linked.

Coexistence is important that you have with your new friend. Before considering the acquisition of a dog of the breed "Bernese Hound" you know certain factors. Not all breeds of dogs are apt to live in an apartment, You must take into account their character, their need for exercise, their interaction with other pets, your care and if you have young children, their level of tolerance towards them.

The four varieties of Swiss Hounds have their own specific hunting characteristics:

– The Bernese Hound, with her beautiful throat (“the howler of the Jura”), demanding, mainly used for hares;
– The “Jura Hound“, an excellent recuperator
– The Lucerne Hound, reminiscent of Small Blue Gascony, he is an active and passionate dog that hunts deer very well;
– The “Schwyz Hound”, less widespread outside of Switzerland, is reserved for rabbits and hares.